Q. Could you please introduce yourself!

I am Sung-dae Oh , the artist who is running 'Tales of the Unusual' on Line Webtoon every Thursdays(In Korea). 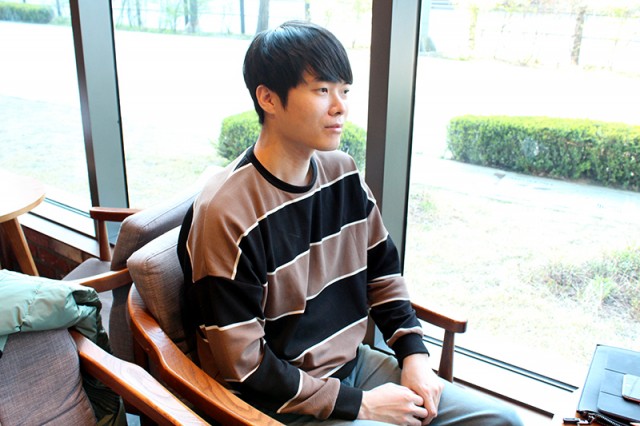 I like comics. I like old comics that everyone likes such as, < Dragon Ball >, < Slam Dunk >, < Berserk>.I think comic books, webtoons, and other popular contents suit my taste.

Q. I thought you would have unique tastes by looking at your webtoons, but they are rather ordinary.

Yes, I am extremely ordinary.

Q. Since you tell me that you are ordinary, it reminds me of the incident where you wrote 'I am not a weirdo' as a postscript for 'Tales of the Unusual'.Was there a reason?

I think people presume that the artists who draw strange comics would be weird in real life as well. I have received lots of related questions which I found to be funny.

Q. You took a rest this time due to your marriage. Does your wife read 'Tales of the Unusual'? How are her thoughts about it?

She doesn't always read them. Above all, my wife is a webtoon artist as well. She used to draw 'Gangbyeonsalda' on Line Webtoon every Friday. When we got to know each other, we both had too many volumes to binge read. However, we have read all the episodes that came out while we were dating. I think my wife mainly read the episodes that were popular. For example, the 'Beauty Water' episode, maybe? 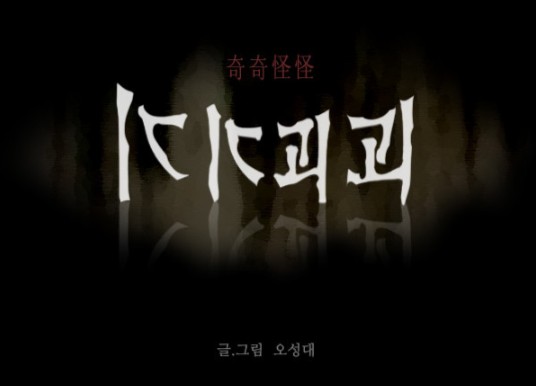 Q. I guess you would always get this question. Where do you get materials from?

As you said, this is the most frequently asked question. Unfortunately, I cannot answer much. There really is no obvious way. Some times, they just come up and other times, I combine two ideas, it is different every time.

For example, if you imagine something like putting a noodle into a mechanical pencil, you might get unexpected results. Above anything else, I contemplate a lot. When I contemplate 20 times, 30 times, I might gain an idea. Even the episodes that readers didn't find particularly funny were created from the best of several ideas.

Q. What do you do when you can't think of any materials to draw about?

I try combining wild ideas. Or some times, I start by inventing the character, the case, or the set up first. If I still don't get any ideas, I mix it the horror genre with comedy.

Q. Because your ideas are so fresh every time, some suspect that there is more than one writer. What do you consider of such accusations?

I don't hold any opinion because I have done all the works. I don't think the ideas would come up if it weren't for my work and I suppose that all the ideas arise because I have to make a living. Regardless of whether they are fun or not, I get ideas every week somehow.

Q. How is the work schedule?

I work all week. I try to work regularly, without staying up all night or cramming the work. To plan out ideas, I usually leave notes. I write down a few lines of keywords or thoughts even if they are not complete ideas and utilize them whenever I can. I write synopses and construct scripts just like everybody else .Once the story is out, the script will take half a day, less than a day for the sketch and 2-3 days for the pen touch. The staffs will help me with the background and the coloring. And in the end, I finish by editing the work finally.

Q. Since you work with your little brother, could you please tell me about any good or bad points of working with a brother?

There is nothing particularly bad. We did not face any big problem because I don't make unreasonable demands to my brother, who is very responsible anyways. At first, of course, he had to improve a few elements, but he is now perfectly proficient.

Q. What was the most difficult part of running your series?

Well ...I am not sure? I don't suppose I've had a hard time because I can't think of any. If I dare to say it, I guess it's when the materials run out? I did not have a lot of moments where I was anxious because of work after I became a webtoon artist. When I made my first debut, I was doing all the works, so it was physically tough. But, as I am now working with my little brother, it is all right.

Q. What is the most memorable episode for you?

It has to be 'My Wife's Memories' and 'Beauty Water' .

In the case of 'My Wife's Memories', I thought of the settings first. It began with the idea of 'a man losing his wife who suffered Alzheimer's and her spirit getting to wander the house after death'.To elaborate on the story, I tried putting several people in the position of the mother character in my mind. Also, I have placed people who could be our mothers, wives, and friends into the characters' perspectives to consider how they would feel in such situations and what might happen next.

In the case of 'Beauty Water', I started by putting the scientific facts aside and imagining about a face that can be molded like clay. And then, I have put together a message with characters who are eagerly wanting plastic surgeries to warn about lookism. The idea related to 'the knee' was not planned from the beginning, but it was a case where the idea developed itself as the story progressed. I suppose that the 'Beauty Water' was an episode that was flowed like water as I did not particularly care about the whole context. In fact, it was originally meant to be only three chapters long, but it went up to eleven chapters because the episode progressed so well.

Q. Was there any episodes that the readers have reacted differently to your intentions?

As far as I remember, there were quite a few, but I can't recall any episode in particular. Though, it was indeed dissatisfying when the reactions were not good despite my anticipations. In contrary, however, there were other times that the reactions were surprisingly positive when I wasn't expecting them to be. For example, I have drawn the 'The Stationery Store' episode with a light heart to have a bit more relaxed episode after some time, but the reactions were exceptional.

Q. Were there any memorable comments for 'Tales of the Unusual'?

I have received a lot of messages when I was running 'My Wife's Memories' episode. They were from readers of an age group who I thought wasn't part of my usual reading population. Many male readers have sent me messages reflecting on themselves after reading the episode. They told me that they have cried while reading the chapters. I was very proud and fortunate to receive such comments.

Q. When I look at the spin-off episodes, I sometimes feel like 'Tales of the Unusual' exists for you to draw these kinds of episodes. What do you say?

Q. How did you first think of starting your spin-off episodes?

There were two causes. When you continue running the series, the materials eventually run out and you get tired. So I have drawn the funny episodes with a bit of caution, but the reactions were better than I expected. Hence, I thought it would be okay to draw such episodes occasionally, but not too many times. So, I usually insert funny episodes about once every four months. They make me refreshed and save me the time to draw the next episodes.

Q. What does StarCraft mean to you since you have published comics related to StarCraft before such as StarMania and StarPanic?Could you reveal your skills in StarCraft?

It is quite bad now. There are so many good players right now. The last time I played with my friend was when the remastered version of StarCraft was released, and I couldn't win a single match.

It used to be all right in the past. I was one of the top three players in the class. I wasn't talented in it but I was the kind that was good because I had played the game for a long time.

Q. What games have you played recently?

I have played numerous FPS games. I typically play Overwatch and BattleGrounds.I especially enjoy Battlegrounds a lot lately. I do not seem to be good at it, though.

Q. There was a difference in the style between 'Tales of the Unusual' and 'Bonbon au Chocolat', which one of the two major works was easier for you to draw?

If I recall the times when I was drawing either of those two cartoons, I was comfortable with both. I was used to either of the two drawing styles .' Bonbon au Chocolat' adopted the drawing style of my junior high school period, and 'Tales of the Unusual' utilized more modern drawing style. I think that's the only difference. 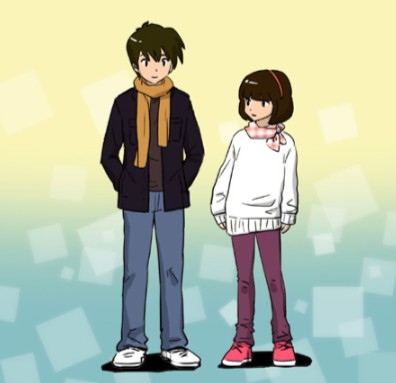 Q. You have said that you wish to continue drawing 'Tales of the Unusual' as long as possible before. Is your opinion still the same? Isn't there anything else do you want to draw?

I had planned for 'Tales of the Unusual' to run for only one or two years at first, but I now wish to run it for as long as possible. It is not easy to earn such a high level of acknowledgments from the readers. I believe that it would the best performance that I could possibly make while drawing cartoons. I want to continue 'Tales of the Unusual' unless my ideas completely run out and damage my work.

Q.The episodes that had emotional endings such as 'My Wife's Memories' and 'A Boy and a Murderer' also have gained positive responses. Have you ever considered that you had a talent in writing not only thrillers but emotional stories as well?

In some ways, I feel like I am more suited for writing emotional episodes, rather than making real scary episodes. In fact, I believe that 'Beauty Water' was more of a disgusting episode than a scary one. As my drawing style is not visually scary, I guess writing emotional dramas would fit me better than classic horror stories sometimes. 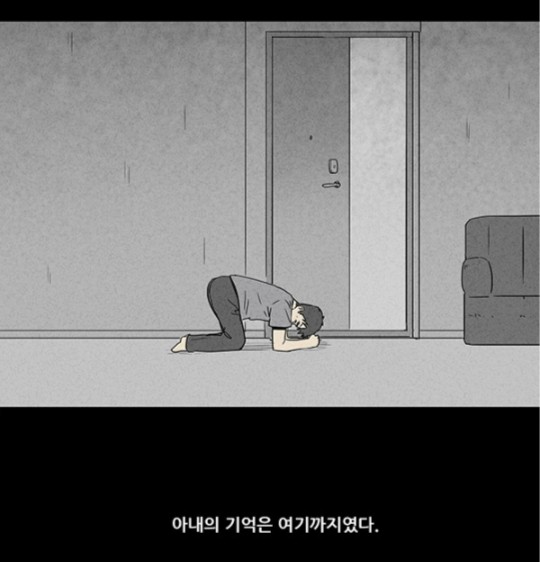 Q. What are the advantages of running an omnibus series?

The fact that you can run it as long as possible if the response is good? It is also an advantage that you can write new stories if you get tired of previous ones. When I was running one particular story for a year before, I definitely wanted to try something new. While I was running 'Tales of the Unusual', as even the longest episodes went for only months, it kept refreshing me all the time. I believe it's one of the reasons why I could run 'Tales of the Unusual' for such a long time.

Q. If you explain the pros and cons of your job as a webtoon artist?

The pro is that I can do whatever I want as I execute both the drawing and writing. While I have to follow instructions from the above when I work at a company, I can do whatever I like if I work as a webtoon artist. I am able to demonstrate my creativity and adjust the schedule according to my efforts.

The downside really depends on how you do, but you can't usually get off on public holidays. Of course, if you work hard enough, you can relax but it is not easy. Currently, 'Tales of the Unusual' is selling okay, but when other webtoons were unpopular, it was indeed financially hard for me. Your financial situation can be all right when you are running a series, but you won't have any income if you are taking a rest. The work environment seems to be certainly better than the old days because you can now receive incomes from previews, replays, and advertisements.