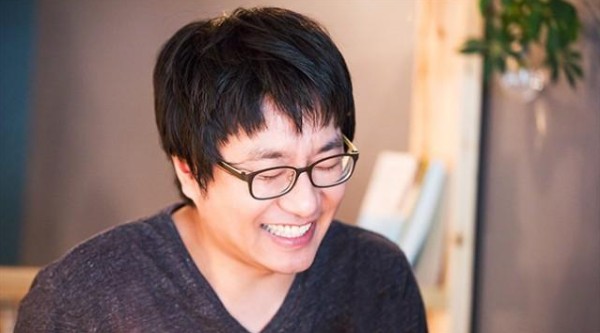 Jinsoo Bae told us his webcomic ‘3-Second Strip’ ‘begs for three seconds in earnest’. Reading one episode of the webcomic takes three seconds that are accumulated until February 18 and made into 57 minutes and 15 seconds that everyone had spent with all episodes until the mentioned date. Even though the total time is less than a hour, the number of all episodes is 1,145. There are those who tell us 'Mr. Bae takes a free ride' through this webcomic that has a high popularity and ‘gains the excessive views compared with its quality’. They may think like this if we suppose that he spends twenty minutes to draw one episode, (but the webcomic artist tells us he spends more time).

If so, how can we measure his effort and time to create more than a thousand ideas? What about his time to try to prevent his sense against loss? Mr. Bae acknowledges such creation and prevention are never easy and has a huge dream of ‘ten thousand episodes’. Even though his drawing was simply a scribble, his first webcomic (Friday: Forbidden Tales) he expressed a scenario in his head in by retiring from a large company and working as a pizza deliveryman makes us think his outlook is optimistic.

Your voice is cracked.

I waked up a moment ago. I usually go to sleep at 7 A.M. and wake up at this time. (The interview was progressed at 3 P.M.)

Do you go to sleep in the morning? Certainly, is the reason your job? I heard from your previous interview that you spent twenty minutes to draw one episode of <3-Second Strip>.

Haha. Only drawing <3-Second Strip> doesn't surely become the reason. And I didn't finish it within twenty minutes. Of course, I spent more time to draw it after creating a storyboard.

Whenever I saw <3-Second Strip>, I thought it was like a satirical cartoon for politics on newspaper. Is it intended to satirize politics?

No. At the debut time, my webcomics like <10th Dimension Boys> by Cutbu aim a so-called idiotic anti-joke. Such aim discloses my tendency. The subjects of my webcomics were anti-jokes at the beginning, current affairs at the next period and are really disappeared now. (Haha)

The contents on your webcomics aren't easy. Sometimes, the best replies explain the meanings of the contents well. As always, is it difficult for you to suggest all of contents within three strips?

Yes. I think ‘Let's not do that’, but I put many texts in some episodes. Because I want to explain the highly intelligible contents to many readers. Naver Reply System brings me to a benefit. Readers' interpretation creates a synergy effect?

<3-Second Strip> is a popular webcomic, but is also criticized that 'you take a free ride' through this webcomic.

When you look back at yourself, is your sense still good?

Well... I think it is still good so far. (Haha) But, I'm not sure about readers' thoughts. It's hard for me to maintain the constant level of my sense as time goes on as if the drier the towel is, the harder we squeeze a drop of water from it after wringing the wet towel makes water come rushing out at the beginning.

My drawing was simply a scribble. At the beginning, a cartoonist decided to work with me, but he or she quitted drawing midway in the individual circumstances. I decided to directly draw a cartoon because my age was already over thirty in those days and thus I couldn't back out of drawing anymore. At the beginning, I took pictures of all subjects of drawing and drew them by seeing photos. I took a picture of a hand when drawing it. Because I had to see its composition.

‘You started from scratch’.

I could get some benefits even though I didn't know a cartoon drawing technique. I recognized from others' words that all strips on

I found from your previous interview that you got many gifts because your writing skill was excellent in high school days and thus your posts uploaded on the message board of famous Internet community were selected as the superb posts.

I usually uploaded my posts on the message board in the game field and wrote about parody or analysis of games. A lot of major game manuals were already made by me in my high school days. I decided to write a movie scenario from the first time because I loved to write.

Do you desire to make the film versions of your webcomics?

I envy it and desire to do it. But, it is difficult to make film versions of

YES or NO Interview

Q. If I'm born again, I will draw a cartoon.

A. Yes. I went to work, but have a far less stress now.

What was the biggest stress?

Do they envy you?

- They say that, but I'm not sure how they really think of me. They are in fine(?) situations due to their high positions. (Haha)

Q. I feel my physical strength is particularly depressed.

A. Yes. I grow older. I didn't originally manage the physical strength, but try to manage it a little from now. In fact, managing it is likely to be more suitable for an expression, ‘rehabilitation’. (Haha)

How do you manage the physical strength?

- I continue to walk. But, only on a fine day. I always ingest vitamin supplements and healthy food, but I'm not sure about their effects.

Q. I'll have a different job after ten years.

A. Well. No. But, it's vague. Maybe, yes. If my life doesn't have any concerns, I want to challenge something.

- It's obscure, but I want to challenge a stand-up comedy  and an acting as a bit part actor.

Wow. Your answer is than what I expected. You yearn for a stage.

- If I show others the conte in drinking party, they frequently say, "We don't know why you don't broadcast yet.  You have an unequaled and unique character like this".

Do you want to upload your conte little by little on Youtube?

Q. I'm the smartest of many webcomic artists.

What webcomics do you enjoy reading?

- It's been a little while since I haven't read some webcomics. At least,

Q. I have made good money as a webcomic artist.

A. Yes. I have made much better money than an office job.

What was the most meaningful consumption?

- Well, it's vague to say ‘consumption’, but a lack of money will preclude me from marrying. (Haha)

Do you think the marriage certainly brings a cartoonist to a life change?

- Who said it? The stable mind precludes composers from composing a sad love song. When I was a single man, I could draw

- I'll come back with a short SF cartoon with a new sensation. (Haha)

Q. I experience a slump in recent.

- No! I have to prepare one more webcomic besides <3-Second Strip>. If a loafing is a slump, is it a slump? I'm originally lazy.

Since then, I feel burdened about a new webcomic.

- No. In fact, I don't feel it. I don't feel burdened about making a story at all, but just hate to draw a cartoon because I can't draw well.

Do you directly make a story and intend to leave a painting or a coloring to others?

- Yes. I'll decide it on my situation.

Q. I'll give an unconditional support to my child who tells me he or she will become a webcomic artist.

A. Well, No. I'll watch it before. I know after watching it.

What do you watch?

- Even though my child tries to draw a cartoon well and his or her drawing style and writing skill are excellent, I have to watch whether his or her cartoons are fascinating or not.

Then, had he or she better not draw a cartoon if the cartoons aren't fascinating in spite of a talent?

- Yes. Then, I'll tell my child he or she becomes a painter instead of a webcomic artist. The charms of cartoon and story are important. Total score of two factors has to be beyond constant level.

Q. If I go back to the past, I'll challenge a webcomic by working as a pizza deliveryman.

A. Yes. My debut is accomplished well, so I can answer it. (Haha)

If your debut was failed, what would you do?

That would be a big loss in the webcomic industry.

- No. Don't you think saying that would make me look too arrogant? (Haha)

First, I aim to draw ten thousand episodes of <3-Second Strip>. Even though this webcomic can't dare to be compared with a series of

Interview about Equipment and TIP for Would-be Webcomic Artists

Can you give some unchanged and practical tip to would-be webcomic artists?

I said, "It's okay you are unfamiliar with drawing a cartoon." at every lecture, but was criticized by them. But, you can write a story that offsets your deficient drawing skill and stimulates many people to read it. Where is a creativity related to a story from? Even though some people are smart and have a unique thought, they don't have an outstanding creativity. A creativity is from a mixture of some factors known by me. Twisting in and changing into this or that way are a creativity. Even though it is obvious, those who desire to draw a cartoon have to read many phrases and sentences. A lot of materials are required. I want to recommend you to read an ingredients labeling on the back of snack bags at least.