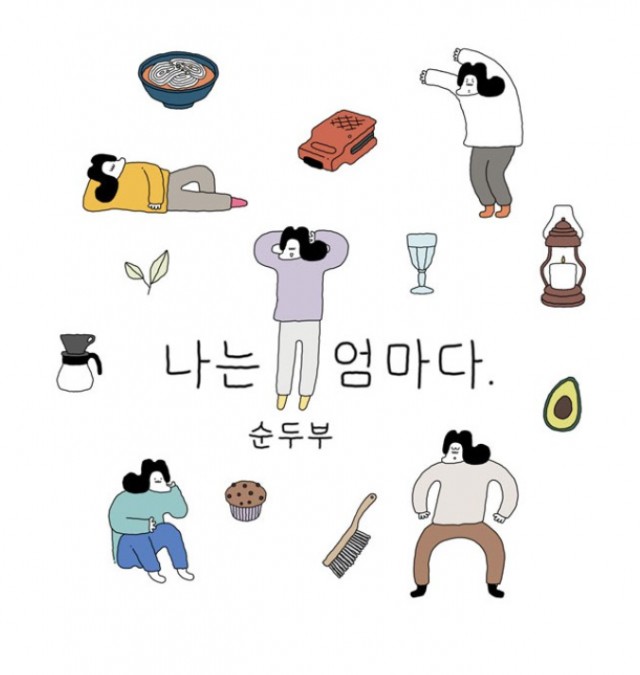 Q. It is nice to meet you, author. Please introduce yourself briefly.

I am ‘Sundubu’ and running a series of parenting webtoons called ‘I'm a mother’ at Daum Webtoon Company every Tuesday. I am 34 years old and I like cleaning and drinking.

Q. How old are your children?

The older one is 9, and the younger is 8 years old.

Q. How have you been these days? Are you out of the hell of childrearing, even a little bit?

The mind is troubled but I am physically comfortable. The two sons are elementary school students and they leave home at 8:30 in the morning. Then, they go to Taekwondo after school and come back around 4 p.m. On a lucky day, I play outside with my friends. I'm free until 6 p.m. on such a day. Heaven has opened! But these kids fight each other a lot and how stubborn their souls are. These are great stress for me. They usually have cereals for breakfast and few days ago, one of them cried because I have mixed some honey oz to cocoball, saying that he is not a fan of such combination…

Q. Do you have any special meaning to your nickname?

I borrowed my nickname Sundubu from a dog my parents are raising. He is a huge spitz and more than 16kg.

Q. Did you major in drawing?

I majored in internet media.

Q. How did you meet your husband?

It was a few months later since I had joined the college. I got a phone call while I was watching American drama. I am from Pyeongtaek and the call was to invite me to the group of freshman people all from Pyeongtaek and to have some drink together. I went to the restaurant named ‘Bookmark’, and I saw my husband sitting at the center of the group and boasting his brand-new phone there. That was the first meeting with him. Heu…

Q. You got married at quite early age. That must be a big decision for you.

I had to go through this anyway. So, I decided to marry him with a thought of being beaten first.

Q. Your kids are a year apart, and they are all boys! How difficult it is. Have you ever thought about raising a daughter?

The energy of son is strong in my house and house in-laws. My sister has a son, I have two sons and son’s there and son’s here. My mother-in-law wanted a daughter. I'd love to raise my daughter, but I'm afraid if I have to raise three sons. I can't take this challenge! Three sons… haha. This is enough. 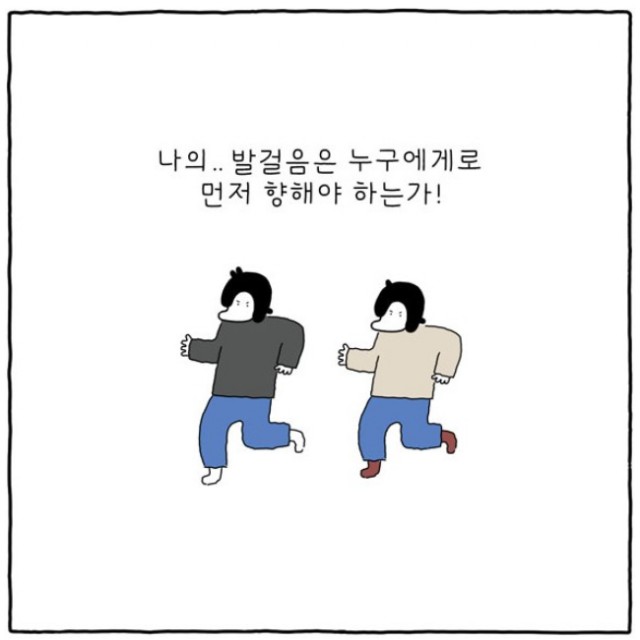 I am a Mother

It was when we posted three episodes. When I was a real beginner, I got a call from a company. They wanted to work with me. I've never had a meeting like this before, so I went all the way to Seoul and talked about it. When asked how I felt to be a writer, I said I was happy to have a job as a author instead of living as a mom only. And the person in charge told me to prepare for the job. I was embarrassed and I just became an author at that time. I told him my simple wish of working as an author for long. Then, he made fun of me, saying ‘Do you think that would be possible? Millions of people are challenging.’ I'm still fresh about the upset I felt when I came home. With the 200th anniversary, I'd like to take this opportunity to say a word to him. In this red ocean where tens of thousands of people are challenging, I'm still alive. Thanks to the readers who always read it!

Q. What inspired you to plan ‘I'm a Mother’?

There weren't many childrearing webtoons in the past. It was wrapped in a noble atmosphere. That's not the reality. That's why I thought it would work if I draw a frank story!

Q. Living toons are also the story of the author and the people around the author. Didn't you hesitate a little?

In the early days, I drew it without fear, but I'm getting careful these days. I've become scared of myself, and society has become more sensitive, so I've made a lot of episodes that was completely changed later.

Q. I thought the title ‘I'm a Mother’ was very blunt and impressive. How did you come up with the title? Were there any other names for the time?

Before I became an author, I was just a mother. I was a mother when I was taking care of my newborn babies. The word described me all the time was always mother. Wherever I went, I was called Hyunbin’s mother, etc. That is why I titled my story, ‘I am a Mother’.

Q. By reading a webtoon, I imagined the mom in the story as mother with a perm, but it felt different from your real feature. What is the birth story of the character?

I have a long straight hair now but I used to have c-curl permed short hair. All the time until last year. I was exactly like the character. The hair artist Eun-seo even made fun of me saying, ‘that mother is always a c-curl permed’. Because the kids are grown, I became a little stylish. However, I always wore bending pants and t-shirt… just like the character! This character is kind of realistic feature.

Q. Face expression is so cute, too. When did you start drawing your nose like ‘vw’? Why don't babies have noses?

I have a habit of wrinkling my nose. When I make my nose curl, it looks like a capital W. So I drew it like that, and the reason babies didn't have a nose was because I was afraid the babies are confused with adults. My drawings of people are quite similar!

Q. The main readership seems to be the same mothers. Is there any other window for communicating with readers other than comments?

Instagram! It is quite fun as my Instagram’s followers are getting more and more. There's one thing I've always been thinking about these days, and I'm going to draw a cartoon on Instagram that gives you the details of cleaning from 1 to 10. I am still thinking about it and this may be the problem…

Q. Don't you have any plans for a fan meeting? Because you and your readers have been through the same experience, and I think it'll be a pleasant and enjoyable talk show.

I sometimes imagine. I wish we had a fan meeting. Some of you might be bringing your kid in, so I hope you can do it in a place like ‘Ibadom Potato-Tang’, where the kids can be located. When I imagine myself rolling around the table and making the Somak (mix of soju and beer), I laugh around my mouth without realizing it.

Q. Compared to the early season, the drawing has been changed a little. Would I say that the lines and colors have become clearer?

It's changed so much that I'm even ashamed of myself. I like it better now. How about you?

Q. What's your secret to documenting the subject for each episodes?

Because such living cartoon is kind of a battle with the subject matter, if something comes up or something special happens, I write down the paper, the phone memo pad, and the computer. I write during my spare time. I love writing! I really want to publish a book of prose someday.

Q. Ah, besides childrearing, the sewing, self-interior, baking... Your days are full of things as you are a cartoonist of daily living-toon. Have you ever make a small job to a big one for the subject matter of your webtoon?-

I haven't done it yet, but I am looking for a chance to explore. I will get a certificate of organizing. With that, I will draw 5 episodes… Such opportunities. These days, when something unexpected happens, instead of panicking, I take steps of joy for obtaining one subject matter.

Q. Parenting on weekdays and working on webtoons on weekends. You're really full of stuff. It's amazing how you've been living this long. Where does the power to make you Superman come from?

I sometimes feel too tired like I feel my gums melted, but I like the life as it is. It feels as if a full sense of self. If quit my life as an author, I would be quite depressed. I would be physically comfortable though. 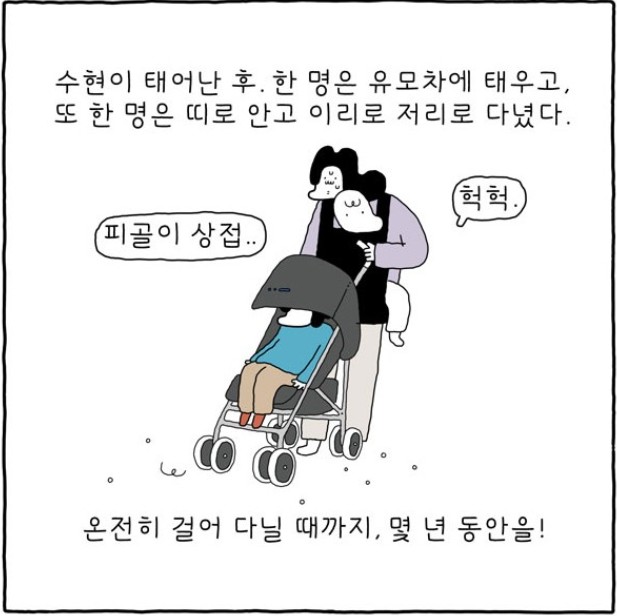 Q. Alcohol that makes you to create great story! What is your favorite alcohol?

Beer. Especially the lager. The beers with fruit flavor like an ale does not fits with me. I also drink soju only when I'm in a deep thought or agony. I usually sip beer like soda. My drinking capacity is a bottle of soju or 4 large cans of beer.

Q. Are you planning to conclude ‘I am a Mother’?

Originally, I was going to finish them as soon as they entered elementary school. tried to prepare my next story in advance, but it's not that easy.

Q. What kind of cartoons would you like to draw if you did other works?

There is one idea in my mind but I don’t know if I can tell you. Just as an ordinary couple decides on a late-night menu, this cartoon depicts the process in detail with an easy decision to divorce. I want to draw a story about adults who decided to divorce because they thought that their lives will be different, but neither happiness nor depression are much different before or after the divorce. The cartoon that gives you the message that men are that men and that life is that life!

Q. Do you have any words to all mom and dad in the world?

Let us do our best to live

Q. Please tell me your resolution for the future!

I will be a cartoonist like a silk thread.