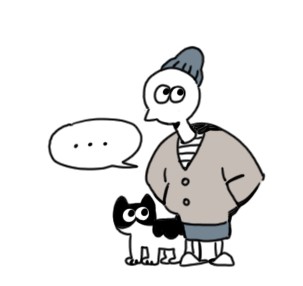 Q. I wonder how you first came into contact with “cartoon.”

A. When I was young, my sister liked cartoons so much, so there were a lot of comic books in my home. I mean cartoon magazines such as  monographs, Mink, Wink and Sugar. I naturally read them and grew up drawing the cartoon, copying those magazines. Ever since I entered high school, I naturally started drawing cartoons for an entrance examination.

A. I originally majored in animation and image. I had a vague idea that I wanted to draw cartoons, but I decided to draw webtoons precisely when I was a third-year student in university. At that time, I set my goal to make a debut. I think I submitted my work to most of the newly opening exhibitions.

After all, I failed to make the debut before graduating from the university.

Q. I wonder about the programs you use.

A. I write a writing continuity with a document program, and I write the continuity in a notebook with a pencil. I just tried working with a computer, but it doesn’t easily change. I complete all painting work other than these kinds of work with Cintiq 22HD and Clip Studio.

Q. I wonder about your work schedules.

A. When the weekly deadline comes, I don't do anything but take a rest. I don't have good stamina. (Sob Sob) I use a day for the writing continuity and continuity, three days for the sketch and a day for the coloring work and editing. I'm flexible, but I usually try to keep routine work schedules. 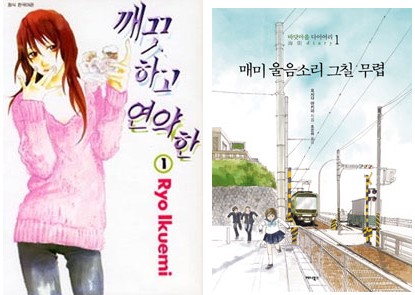 A. After I completed

A. I recently read 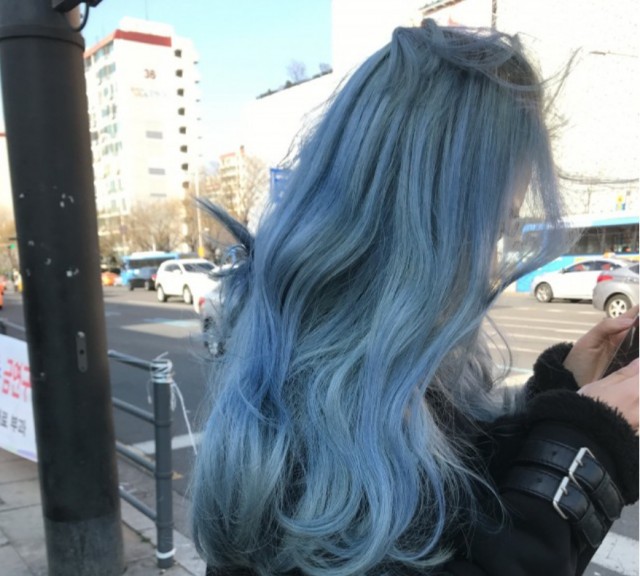 Writer's hair color. It was retweeted on Twitter so much.

Q. You posted a photo of your ash blue color hair and became a RT star on Twitter. I wonder about your hair condition now. :) 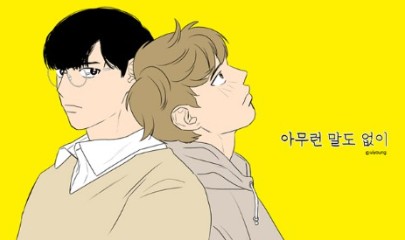 Q. I wonder about the meaning of the webtoon title

A. The title is “Without any word” because Junyoung constantly disappears “without any word,” and the title appears in Jisoo's monologue in the webtoon a couple of times. It's because I also like the long title!

Q. What does “Mr. Heart” mean in the webtoon?

A. I think every people live with their own hearts. I just make a character and give lines to the character. Every discord starts with emotions. Mr. Heart can tell you those processes more intuitionally.

Q. I thought Mr. Heart played a role to represent two leading characters' inner feelings. What made you choose this material?

A. I think “Mr. Heart” is a character that visualizes the most negative part of leading characters rather than representing their inner feelings.

Sitting in a café, I scribbled a note imagining what kind of webtoon I should draw.

That was the shape of the current Mr. Heart. I thought, “Oh, it's cute” and “What if a cute man says only dirty words?” After I came up with it, the rest was so easy. I made a story really fast.

Q. Did Junyoung's “Mr. Heart” disappear with anything?

A. The biggest reason why Junyoung's Mr. Heart disappeared is to realize that “Mr. Heart” is his own part, not a real thing. It's because Mr. Heart deprived of his life that Junyoung could start speaking. Actually, Junyoung didn't have much greed for his voice. I think the former one is the biggest reason.

Q. How long has Junyoung been in jail?

A. He has been in jail from when he was 18 to 23 years old. It's a year after the two men cohabited from Episode 7.

Q.  I wonder how Jisoo lived while Junyoung was in jail.

A. In the case of Jisoo, as Jisoo enters the university, he would start to have strong responsibility. He is full of thinking, “everything should go well,” so he would just study except for visiting hours. For this reason, there comes a story where he doesn’t participate in school activities like MT or festival.

Q. When did Jisoo start keeping Junyoung in mind? I wonder about Jisoo's emotion in his high school days.

A. Jisoo is a character with very high self-esteem. If Jisoo himself felt “I like Junyoung,” he would never ponder it over. I want to tell you if you ask me when Jisoo was first attracted to him, Jisoo had a crush on him at first sight! Since then, it may take a little time to clearly feel “Ah, this is love.”

Q. Is Jisoo's feeling towards Junyoung a simple love originated from his pure mind or, as Mr. Heart says, the guilt that he was falsely accused of a crime for Junyoung and the obligation that he should be responsible for it?

Q. Do you have any character you especially have affection for?

Q. Personally, I want to hear about Hoyeon's story more!

A. It's a shame that I can't write Hoyeon's story anymore. Ooops, I should write it here. Hoyeon becomes Jun Do-yeon of the independent film industry. Hoyeon gets a double-eyelid surgery. Hahaha!

Q.  I wonder if you have a plan to make follow-up work or to write

A. Supplementary stories of the two episodes will be posted over the two weeks from February 15th. I want to tell you many more stories, but I think these will be stories about Jungyoung and Jisoo's affectionate and sweet love like a battleground.

Q. Lastly, please give some tips or advice to people who dream of becoming webtoon

A. I wonder if a person like me could give you some advice! I hope you feel pleasant

when you draw webtoons. I think that if you yourself write stories

pleasantly, all stories can be fun. Of course, you can get a better result for the amount of effort when you work! Please make webtoons pleasantly!