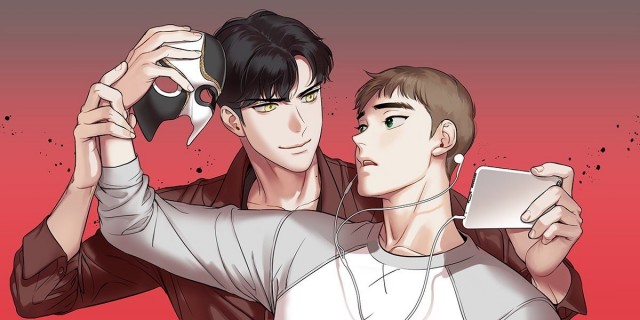 Hello, my name is MinGwa. I’m currently running a series of ‘BJ Alex’ in Lezhine.

Q. What does your nickname MinGwa mean?

It doesn’t have a special meaning. It’s just a mix of the nicknames that I had.

I made my debut thanks to my graduation work. Until the third year of university, I was hoping to develop my career in game and illustration-related fields. For my graduation work, I had to choose between cartoon and animation. I chose cartoon since I was a little more familiar with it than animation and had lots of fun. I was even more excited when the platform contacted me after seeing my graduation work. This was also when I decided that cartoon was my field and debuted as a webtoonist.

Q. What is the best purchase among many items you bought recently?

Air Purifier. I don’t know about purifying the air, but it cleans out the bad smell for sure. It was certainly a rise in the quality of my life.

Q. If you have a webtoon, book or movie that you enjoyed recently, please recommend us.

I’ve been searching all over different webtoon platform and even Netflix to answer this question, but I seriously didn’t read or watch anything these days. But for webtoons, I really like the ones that capture daily life, so I recommend ‘Acoustic Life.’ For movies, I loved ‘Bohemian Rhapsody.’

Q. I know you had a Q&A session to celebrate the one-year anniversary of ‘BJ Alex.’ What was the most memorable or unique question?

I remember somebody asking me, out of nowhere, “Can I marry you, MD?”. Back then I thought it was only funny to me, so I didn’t upload it, but now that I think about it, I should have uploaded it because I’m still thinking about it. Anyways, no, you can’t! Haha.

Q. How did you choose the material for ‘BJ Alex’?

I found out on social media that there was an internet broadcasting platform for adults after seeing the advertisement and wrote it down. After a few meetings, I decided to make a series about it because it was a fresh and provocative material that doesn’t exist in BL.

Q. I heard that you originally plotted the characters as BJ Sue and Fan Gong. If this was the case, how would ‘BJ Alex’ be different from now?

A whole lot different, I bet. Because Gong is a nice and kind character, the story would have been lighter and more lovely. There would have been many sexual scenes, but not like the atmosphere ‘BJ Alex’ has now. It would be a story of more ordinary characters. 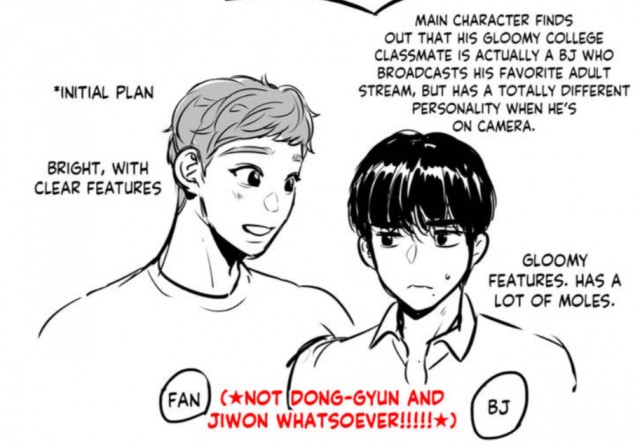 Q. Your work maintains to be the first place of overall rankings among the series in Lezhin. How do you feel and what do you think are the aspects of ‘BJ Alex’ that made so many people love the work?

I didn’t expect my work would come this much and beloved by so many people. When I prepared for ‘BJ Alex,’ never have I thought “this work has to be great. I have a good feeling!”. To me, ‘BJ Alex’ was just one of many works that I’ve been working on, and that’s why I am still dazed by the outcome. Every time I look at the ranking, I’m still surprised. I’m forever grateful for all the viewers who love my work.

At first, I thought sexual scenes were the main attraction of my webtoon, but these days it’s been a while since sexual scenes were included in the story, and people still seem to love it. It was surprising. I don’t exactly know why my work is still so popular. There may be many reasons. If any of my readers are reading this, please let me know privately!

Q. I know that ‘BJ Alex’ is serviced overseas. Which countries are provided with the service? Is there any difference in reaction between domestic fans and overseas fans over the same episode?

We provide service in Korea and Lezhin U.S. version. I also thought the reaction would be different between here and other overseas, but they are pretty much the same over a big incident. They sometimes differ in small incidents, but it’s more like the difference between people, not countries.

Q. You mentioned that the storyline has changed while it unfolded. What was the biggest change in the storyline?

The emotions of the characters didn’t go through a big change, but the incidents have changed after the beginning and middle phase. Come to think of it, it was mostly because of the appearance of Myungdae. Myungdae was planned to appear on the story towards the end but as I ran out of episodes. As a result, Jiwon started feeling jealous, playing weird games (and thanks to this, Dong-gyun has a date), and tChanwoo and Myungdae were connected earlier.

The plot changed overall too. In the planning stage, I was going to talk about Alex’s broadcasting story mainly. Then more characters were added to the story, and since the main background that the story took place was school, I had more outdoor scenes. Some episodes were plotted around the background, which later on led to a bigger change of storyline like a butterfly effect.

Q. What was the most important factor in changing the story?

Most of the time, the story changes because of the ideas I get along the way. If I have a better idea than before and add or change things here and there, the story towards the end also changes. When I reflect the readers’ reaction (including the view rate and transaction), I just adjust the length of a story or just consider what kind of mood or how they want the story to evolve but doesn’t go through a big change. I can say my own opinion can be the biggest factor for change.

Q. Dong-gyun’s initial emotion seems more like a fan than a love. If you must, why do you think Dong-gyun fell for Jiwon?

The emotion started as a fan but then changed when he first met Alex in person and became a sex partner. Meeting his favorite BJ Alex and sleeping with him regularly, Dong-gyun had a hard time controlling his feelings. Besides, he had dates and has seen Jiwon being jealous, which made his feelings grow more. The fact Dong-gyun is a character that has no experience in relationship and could not draw a sharp line between him and Alex was the biggest reason above all.

Q. The scene where drunk Dong-gyun breaking into the broadcasting smoothly passed in the story. But right after the scene was revealed, many readers worried about how the story would unfold. If this happened in the real world, do you think the two could recover their relationship? What was the reason Dong-gyun had an emotional outburst after he drank?

- I didn’t expect this episode to have such a big reaction. When I plotted the storyline, this was just a passing episode. The part the readers worried about the most was when Dong-gyun’s face appeared on the screen. I should have covered it instead of drawing it all. This is my mistake and showed my lack of capacity. If this were to happen in the real world, they wouldn’t be able to make up. Dong-gyun gradually grew feelings for Jiwon and wanted to step up a relationship but was mad at Jiwon for using him all the time. 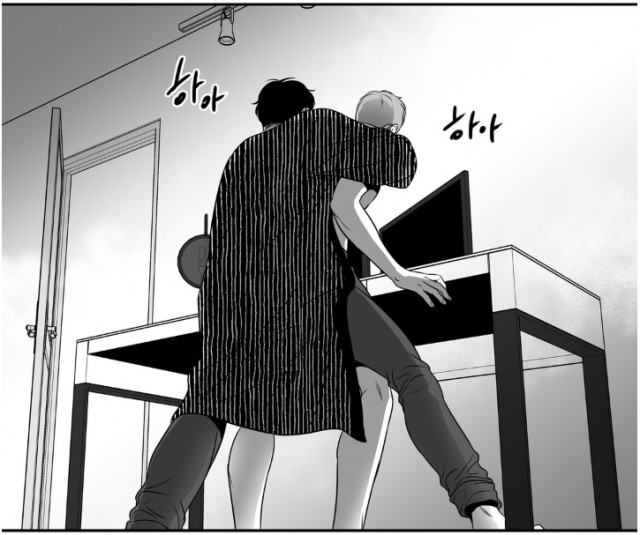 Q. You said on your spoiler that you couldn’t wait to spoil the next episode. What was the episode that you’ve been dying to tell the readers about? Are there any more episodes that we should be excited about?

Yes, I want to spoil things the most these days. The peak of the relationship between the two is approaching. ‘BJ Alex’ is the work that has been giving me the most spoiler alert out of all my works.

Q. What kind of effort did you put in to make Jiwon turn into an attractive Gong?

Definitely physical. Face and body…that’s it. He’s an asshole he should at least look good. 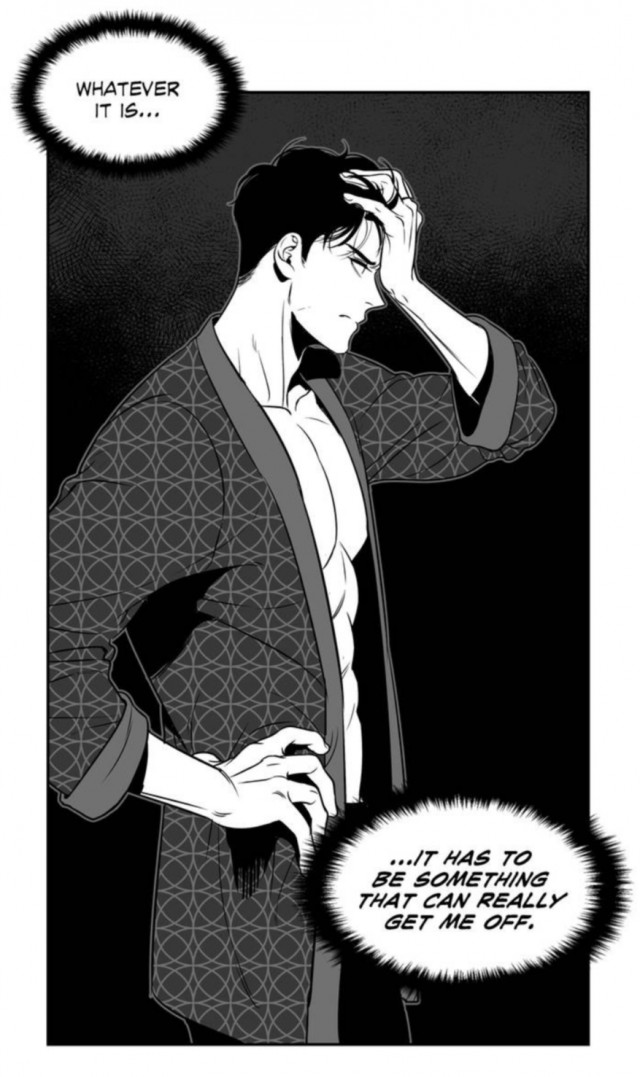 Behind Story of the Webtoon

Q. You’re active on Twitter. Is there a reason? Is there any part of Twitter that gives you more strength?

I use Twitter for promoting my works and checking readers’ reaction. Lezhin doesn’t have a comment bar, so actively using social media is important. When I receive secondary creation or cheering mentions, I feel like I should work harder.

Q. Unlike a high-level BL, ‘BJ Alex,’ your previous work ‘Secret Star’ was a fun and light comedy. Which genre was easier for you to draw?

Q. How did you design the masks from ‘BJ Alex’?

The icons that represent a play are smiling masks and sad masks, so I mixed them up. That is why one side has a happy eye and the other side sad. The mask doesn’t necessarily indicate that the whole life of Jiwon who’s broadcasting and the life he has been living was a lie.

I thought about how Jiwon obtained that mask. I decided to I decided he bought the mask in Venice. I couldn’t imagine Jiwon making the mask himself for the broadcasting. 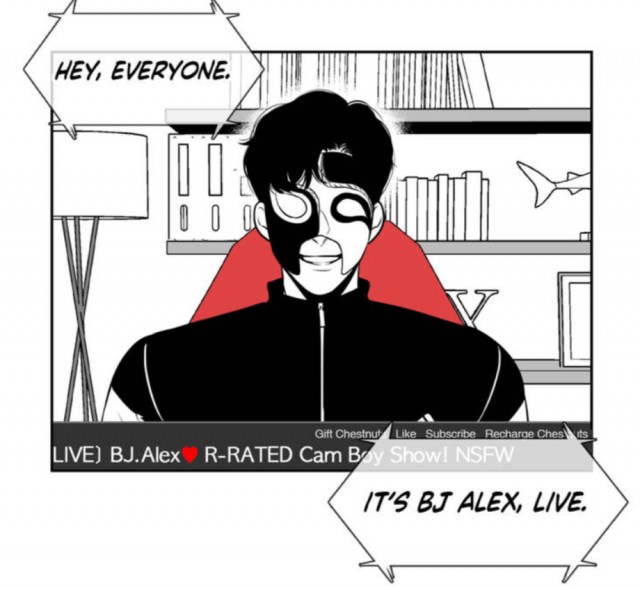 Q. Could you introduce the tools and programs that you use for your work?

I mainly use Clip Studio for drawing and Photoshop for editing and drawing Conti. For the device, I’m using a desktop and a flat tablet.

Q. Is there any difference in your life compared to when you worked without an assistant and rest?

First of all, I now have an assistant and a rest. Haha. I feel like the life I’m living right now is a lot more flexible. During my first work, I wasn’t economically stabilized, but I was young. Now the quality of work is secured, and I could take a rest whenever I need to. I believe all platform should give all cartoonists the right to take a rest and economic support for assistant employment.

Q. Do you have a new piece you’ve been working on?