Q. You have drawn webtoons for a long time. Is there any particular work that you feel most attached to?

I think 'Jungle High School' is the first work that comes to my mind as it brought me a lot of recognition.

Q. When I read your webtoons, I often see comments saying that ' kyu-sam Kim is a genius ‘. Do you check your comments? How do you feel when you find such comments?

I check the comments to some extent, but I cannot read them all. My eyes become very sore. If people give me praise, I am of course thankful, but I also get burdened with the idea that I should do well.

Q. 'Hive' that was finished not long ago had a very long story compared to your previous works such as 'the lighthouse of N' or 'Jungle High School'.Since when have you been preparing 'Hive', and was there any difficulties in preparing?

I have been preparing 'Hive' since the end of ' Chunrima Mart ' .The idea was materialized when I was running the series 'Buff Girl Aurora'.There were confusions at first because 'Hive' had adopted a new method called 'smarttoon' .

Q. Though 'Hive' has received much acclamation, there were some controversies about scientific facts. Could you please add your thoughts or explanations about this subject?

I don't believe that the webtoon should be ridiculous enough to deteriorate its immersive nature, but I consider that the fun of the drama would be lost if I get caught up too much in the scientific facts. And, it is simply beyond my ability to fully satisfy people in certain positions or places by proving the scientific facts.

Q. Since 'Hive' was a long-popular series, it seems to me that there would have been a conflict between the real-time reactions of the readers and the story that was originally planned. Have you experienced such contradiction?

I originally intended to kill more than two-thirds of the characters at the Jamshil Tower. But then, I saw the American TV show called 'Dexter' at that time, and it felt so terrible to watch the people around the protagonist getting killed so easily. Perhaps, it was because of my age. So, after some consideration, I have adjusted the story to include fewer deaths assuming that the readers wouldn't want all the characters to get wiped out.

Q. When you read 'Hive', there are many cult figures like 'The Dogman (Hal-ive)' who has a strong personality to attract many readers. Is there a gap between the characters who you expected to become popular when you were planning the story and the actual characters who have earned the readers' affection in reality?

Yes. The character who has shown the biggest discrepancy was the protagonist, Deputy Lee. It was heartbreaking to see Deputy Lee get so much criticism.

Q. The black comedy that popped up suddenly in serious and urgent situations, mainly through the Dog Man, were well received by readers. Was there is a secret to writing such intelligent dialogues?

I took in large amounts of caffeine before building the script.

Q. I understand that you will be releasing 'The Dog Man', the prequel to 'Hive' within a month. You said it's going to be much shorter than 'Hive', but as you know, 'Hive' was quite long ...How long would 'The Dog Man' really be?

I plan to run it as a medium-length webtoon, but of course, as it is only a plan, I don't know exactly. 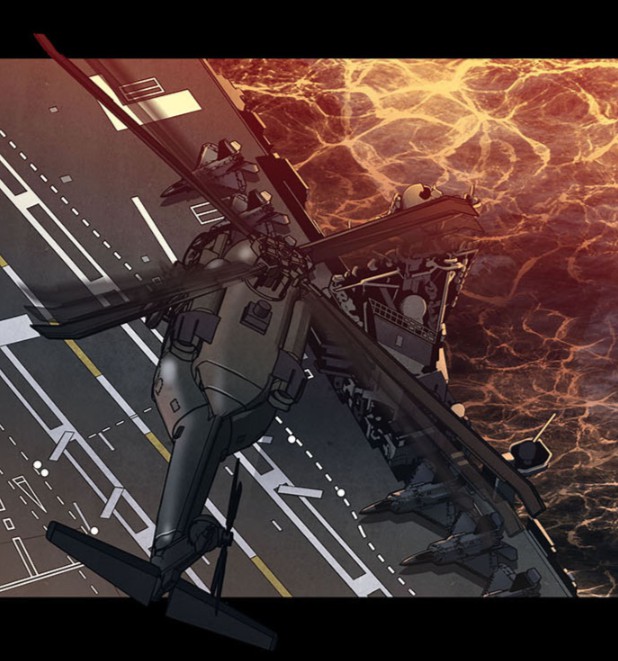 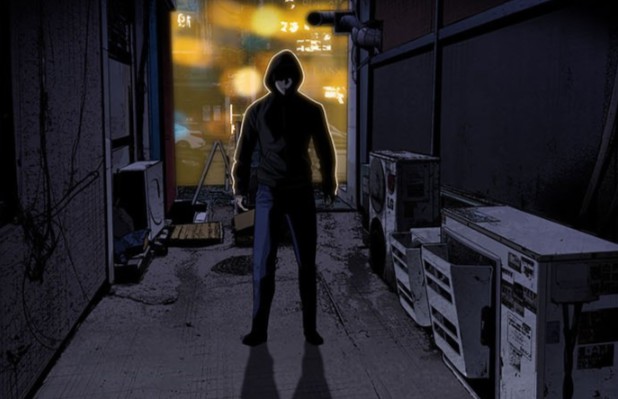 Q. You have worked closely with the story writer of CRG for your new work 'Vigilante'.What made you two to work together?

Line Webtoon suggested the idea to me, saying that there is such plan to create a new webtoon and that the story writer of CRG seems to be the right person for it... 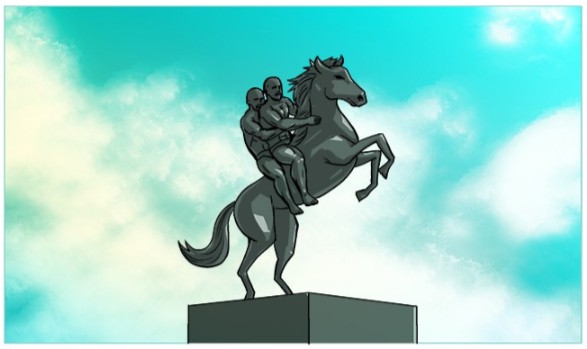 ▲ A symbol of 'Chunrima Mart'

Q. In your previous works, such as 'Chunrima Mart' and 'Hive', you have demonstrated a lot of social criticisms. Have you decided to participate in 'Vigilante' because it had similar directions?

I guess that's why the proposal came to me initially, but I am not working for the purpose of criticism. I don't have enough insight to criticize the society.

Q. I'm curious about how you felt the first time you came across the story of ‘Vigilante’.

I was quite burdened doubting that if I could seriously execute the story. The subject matter was quite unique ...And, I was also concerned about getting sued as the storyline would be very controversial.

Q. Do you feel different emotionally and professionally when you get to only work as the illustrator compared to the times when you had to do both writing and drawing?

Personally, I feel more comfortable when I do both myself.

Q. I can see the traces of 'kyu-sam Kim' from some of the characters in 'Vigilante'.I am wondering if you had any influences on the story, and if you did, to what degree?

I am curious about which specific parts you are referring to when you say you can recognize my traces. I suppose it's because I am constructing the script? Other than the script, I guess you might feel such presences because I am inscribing the dialogues as well.

Q. How does the work schedule get divided?

I receive the general flow of the story and I take care of the rest. Since the story writer of CRG is not related to comics, I am responsible for cartoon production.

Q. Because there are so many action scenes, I assume you will need a lot of materials and resources. How do you study actions?

I go out to the gym to exercise myself and ask the coach about poses.

Q. 'Vigilante' is a very serious thriller that criticizes the society. Do you believe that the message and the topic that you wanted to convey to the readers are clearly portrayed throughout this work?

I think it is not good for the creators to mention about such elements directly because it depends on the readers feel as individuals.

Q. As there are several issues to criticize about in the current society, was there any instance where you have changed either your interest or opinion while continuing to work?

There were quite a lot of cases like that. I believe people shouldn't set their thoughts, claiming that there is only one right way.

Q. Did you really use the name ' fakelante ' in your work based on the comments you read?

Yes, it was based off of comments that I have read. I also plan to use ' assaulante ' as well.

Q. What do the law and justice mean to you?

It's a very broad question for me to answer, but I believe that the law should try harder to protector the victims of a crime, who are usually the weak people.

Q. The heroines that typically appear in your works are very competent, self-driven and have strong personalities. However, at the same time, these heroines tend to only like the protagonists. Do these heroines reflect your ideal type of women?

Q. Now that you are running a new series, do the readers react differently compared to the times when you were running 'Jungle High School'? If so, how?

The readers react differently to the new series by saying that they didn't think I would be able to draw in a realistic style. I suppose this was the biggest change for them.

Q. I heard that the visual adaptations of 'Vigilante' and 'Chunrima Mart' have been confirmed. For the readers who are curious, what is the current situation like?

As we can't identify a lot about secondary adaptations until they actually come out, I myself has to wait for them as well. I am just curious about how they are going to portray 'the Payas' .

Q. You have posted webtoon lectures on YouTube.What has led you to such action?

Sometimes there were requests for a webtoon lecture coming from very distant places. I really wanted to go in person but the places were too far away. So, I thought it would be nice if those people could see the lectures regardless of their locations.

Q. Finally, I would like to ask your advice for aspiring webtoon artists.