Regarding a point of view toward the family in the webtoon Navillera.

Regarding a point of view toward the family in the webtoon Navillera.

In Korea, there is a man somewhere in the sky of Seoul, which is a familiar sight.

The age of the man is now 70years old. It is about time to prepare for the end of life. For the man, who has experienced in modern history from liberation to the Korean war, there is a significant dream that he has not yet accomplished or drawn.

The man lived hard, built a family, and talk about the dream in front of the results. He saw a ballet practicing sight and wants to do it, which he has been longing for a long time. 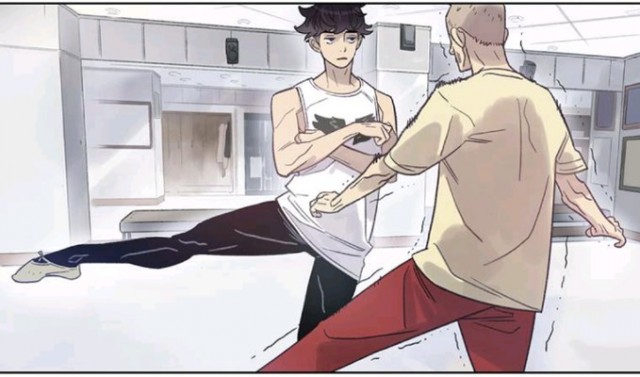 It is a scene from the 1st episode of Navillera (Written by Hun/Drawn by Lee Min), which is a work I would like to introduce today.

-Eternal theme and a keyword for all Korean content [Family]-

[め組の大吾Firefighter! Daigo of Fire Company M] and [昴Subaru] made by Soda Masahito, who is famous for [カペタKapeta], are some of the comics that used ballet as meaningful content. However, the way of dealing with the content is quite different.

[Subaru] deals with the eternal theme of Soda Masahito, [Genius]. Of course, a genius lives with internal loneliness. Normal people cannot look into the stage, so it is difficult to experience a common feature, which leads to a lack of understanding. [Subaru] comes with a story of a genius ballerina, Subaru, who understands her talent and the process of growing and being completed by surpassing the efforts of ordinary people. Soda Masahito's exceptional screenplay and storytelling are highlights. In this work, however, the story only shows the intensity of the individual who is difficult to understand.

Navillera tries to solve this material differently. It is a keyword [Family], which is often seen in Korean Contents. The main character of Navillera, Seo Deok Chul, has raised and protected his family by working as a post officer living until, he became 70years old. His children have grown up and worked at decent jobs, and his granddaughters have grown up well successfully. It's a sound family that people usually assume. However, as the [House], which is on the main character's back in the animation [Up!], this family is a rack, which makes the shape of his life, and simultaneously chocking shackles. Families don't have the imagination to accept that the 70years old man starts an unfamiliar art called ballet. They just request like "Remain as a usual father and grandfather.", and also dare to order "Sacrifice your last dream for me". The biggest reason is, of course, others. For the eyes of others, as if he is not entitled to draw the last picture of life, it could be the most Korean-like scene in a way.

One big axis consisting of Navillera is the person Seo Deok-Chul. It deals with the process of a person being “released” from the bondage of a family that made his own life but the greatest burden of trying to draw the big picture that completes life. He stubbornly moves silently toward ballet in his way. It could be layered as to Rob Reiner's movie [Bucket List], which a man who sacrificed his life for his family tries to do the things he wanted to do for the rest of his limited time of life.

A story that makes another axis of Navillera is also related to the family.

-A world that is hard to dream, the lives of young people who are immersed in the eyes of others.

Lee Che-Rok dreams of a ballerino. He is a young student who subsists on his dream while learning ballet. One day, he meets Seo Deok-Chul when he visits the ballet learning institution and forms a relationship. The way this young person lives is not intense or fierce, unlike other works that handle youth. He has a big dream, but it is hard to maintain. The bondage of him is also [Family].

People are born with unlimited possibilities of life when they were children. The old generation usually keeps asking what they want to do. The life of a child is regulated from the question and built. Lee Che-Rok's father requests his son to grow up as an athlete, and let him play baseball, swimming, and soccer. However, the other father's failed business makes him difficult to form a relationship with other people, and he becomes far from his father's expectation. His mother, who was a life supporter, dies one day and runs into despair. However, his mother leaves one thing for him to dream and gain the strength of life. That is the ballet. As you can see, not the power created inside of him, but even the existence of a family is the result of forcing him.

Although his mother died, for every piece of the dream he left, he goes on day by day like many other young people. We can easily meet people like Lee Che-Rok if we turn our heads a little bit while serving others and running away.

- The limitation of a family that regulates and locks up, liberation and transmission by yielding new family. –

The story shows the process to complete a big picture by these two people meet through the common term of ballet and family, while running hard and sometimes hurting. The images of life in various parts of the city of Seoul, embodied in the delicate handwriting by Ji-Min, artist in charge of painting, instill a great deal of weight in this process and create a strong message.

Seo Deok-Chul moves towards his dream little by little, a dream that stands on a stage after learning ballet. The dream comes true in the process of accepting Lee Che-Rok, who lives in an unstable life due to the loss of his family, in his life. He advices to Young Lee Che-Rok’s lonely life and nurses when sick. The old man becomes a family that fills the gap caused by mother and father’s absent for young people. The young man Lee Che-Rok is starting to fly beautifully after the gap is filled. In that fly, the old Seo Deok-Chul holds his hand and runs toward his dream. His family is completed and became a shell that holds his life, but he built a new family to break the shell. Seo Deok-Chul's life is unfortunately tragic. He suffers from Alzheimer’s - Dementia, and the liberation and freedom he gains are eventually shattered. It is a device that does not stay in a beautiful fairy tale-fantasy but gains weight that takes our life seriously. The work has prepared a present for the readers who read the story to the end. Seo Deok-Chul eventually lost his life due to the Alzheimer's, but with his new family, Lee Che-Rok, stand together on a stage and dance beautifully, soar.

He squeezed the brush to complete the big life picture he wanted to draw.

-Basic characteristics of a family / Completion through the succession-

The final epilogue of the work is now finished with Lee Che-Rok, who became a famous ballerino, visits Seo Deok-Chul. His Alzheimer's now devours him completely, so does not even know him who's like his grandson.

Is this a tragic end? I believe it is not. Indeed, Seo Deok-Chul is like a dead man. He does not know himself, which is an impeccable death that lost his world. However, it is not called death. There is a new family that he acquired from the liberation of his past life, and the family has and will live with the tangible and intangible aspects of his life. Isn't it a true completion of life in such a way?

- Korean webtoon. One of the greatest artistic achievements within 20years of history. –

Although it has changed a lot now, we often meet with a cruel gaze that sparely treats the genre of webtoons as one of the genres of art. I can confidently say that it is a wrong point of view. Is not Navillera, which I introduced today, one of the biggest cases? There was a time when Japanese cartoons occupied more than 70%, and it was natural to come up with it when talked about comics. Webtoons walk a different route compared to the Japanese cartoons, and it is the time to raise huge accomplishment like the comics. It is because of this wonderfully condensed recapitulated story of a family that is the greatest theme of our lives.