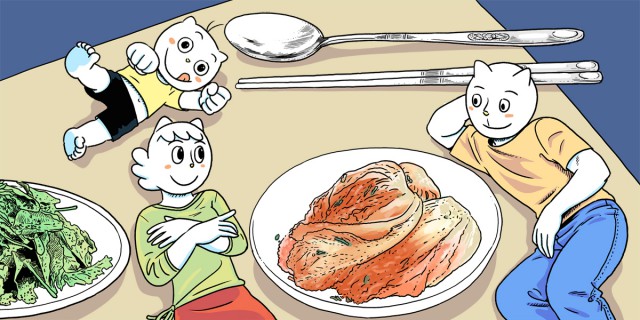 Yeon-sik Hong debuted through ‘Weekly Boy Champ Rookie Contest’ in 1992. Trying to find his own character in the middle between the time when Myeongnang Manhwa (bright comics) and Shounen Manga (boys comics) were published, he faced an inflection point as a cartoonist by learning an animation at Korea National University of Arts at the time when the published comics were encroached. He was active as a cartoonist, lived as a student and a member of a family, and escaped from the urban life. He won Our Comics Award of the Day in 2012 through <Uncomfortably Happily> that represented his autobiographical daily life. He won the same award even in 2015 through <Mr. Madang's Table> that had a favorable review by contents he observed his past and present through an uncomfortable but happy life. The power in <Mr. Madang's Table> is a discovery of the positive aspect for himself and his family obtained during looking back at himself and the indissoluble connection with family. A discovery of connection is started from dishes that a mother picked up ingredients from the rough ground, cooked them and served at table with her way.

Mr. Madang has a happy life with a wife and a son in the quiet area in Paju. In spite of an uncomfortable life a little, he has a happy life by supporting his own family and going to work. It's necessary that he brings his mother to a hospital in his daily life. Being about to reach the age of sixty, she is living only with her husband who depends on alcohol. The sick mother is absorbed in assisting the ill husband who has trouble moving. Mr. Madang's wife suggests they live with and take care of his ill parents due to their risky and pitiful lives, but Mr. Madang absolutely refuses it. Because he is concerned that his happy life arduously made by him is invaded by parents.

Family that Has to be Erased for Current Happiness

The memory about a family in his childhood is dotted with full happiness through the hearty meal cooked by the mother, on the other hand, father's alcoholism and family violence. His father knocks over the table of his mother and brothers that symbolizes the happiness. Thus, he and his brothers stay away from their house and the father with her after growing up. The happiness without the father had been led during the short time before the brothers are absorbed in looking after themselves. The neglected mother had lived with her husband again while Mr. Madang didn't have the energy to look back on his life for his happiness. His family is a precious existence protected by him, but she is rapidly aged after being excluded from such existence.

He recognized that she had less will to live than people in the same age bracket and was aged whenever he brought her to a hospital. In the other hand, he finds that his father who has harassed Mr. Madang's brothers and mother still lords it over her and devotes himself to the will to live. When he thinks why she rapidly gives up her life, he recalls the father who knocked over the happy table. He concludes that a reason for parents' uncomfortable lives is his father.

But, developing a hatred for him is a method to remove his past life. Father's behavior is really wrong, but the happiness Mr. Madang desires is related to mother's broken will to live. He wants to be separated from his past unhappiness for happy lives of him and his family. That's why he tries to completely sever the link with his past and such link includes the happiness in his childhood. His past doesn't obviously include only unhappy memory. His strong desire and anxiety to protect the current happiness just regard his entire past as an evil memory and sever it.

Mr. Madang is cooking a meal for a wife and a son. The meal cooked by him follows mother's way. Kimchi and Doenjangguk (bean paste soup) she cooked tell us that she is connected to Mr. Madang contrary to his effort to be separated from her. He finally recognizes that the meal cooked by him in her cooking way is the happiness shared with his current family and that his happiness is connected to her. <Mr. Madang's Table> tells us that Mr. Madang is connected to his mother and that his cooking way checks the connection between her and him.