The popularity of webtoons is now much higher than it was ten years ago due to derivative projects based on the webtoons represented by 'Along with the Gods' and other celebrated webtoon artists. However, at the same time, the webtoon industry is also worried about whether the webtoon market would last for a long time due to the illegal leakage of webtoons and people's perception that webtoons should be free.

As I was wondering how we could make the webtoon market healthier, I thought of looking into the history of published comics which could be called as the predecessor of webtoons.

Though the published comics market has now collapsed, there has been a time when published comic books were so popular that friends used to compete for who had more comic books and who had the latest comic magazines. And, the history repeats itself.

Even after a long time has passed since then, I believe there definitely were certain points in the history of published comics that we could learn from. I am going to briefly examine the ups and downs of the published cartoon market and interpret the messages that the past of comic books have passed onto us in the current webtoon market.

The first step is to share three kinds of thoughts that I felt while watching the growth of comics.

The cartoon market, that started with rental services,

rental services were a great help to secure users

The launch of the published comics has begun with the rental services.  Therefore, it was most surprising to find that previous comic book readers were reluctant to consume paid contents nowadays since the webtoons were launched as free services.

At first, I thought it was natural to believe that the published comics started with purchasing services in which the readers would pay a full price to buy each comic book and then, got followed by rental services. Rather, it was the opposite. So I looked into the history of published cartoons with the hope that the webtoon service could change people's awareness like published cartoons.

Comics lending shops, which could be considered as the starting point of published comic books in Korea, were originated in the 1950s when people's economic strength was very low due to the Korean War. Only a handful of buyers were able to purchase and own comics directly.

In this context, published comics had to start with rental services rather than purchases. The published comics did not make as much profit as they could have if people would have bought their own comic books. But, the entry barriers to comics became so low that even children with no buying power could read comic books.

In the period where there were no cultural services such as YouTube, movies, games, and smartphones like in the past, the comics lending shops were a space where people could find enjoyment in everyday life after the pain of war. Thereby, I think that comics lending shops have contributed to building the foundation of the comics market.

And it seems to be partially related to the situation when the webtoon service was started for the first time in the portal websites in the 2000s. 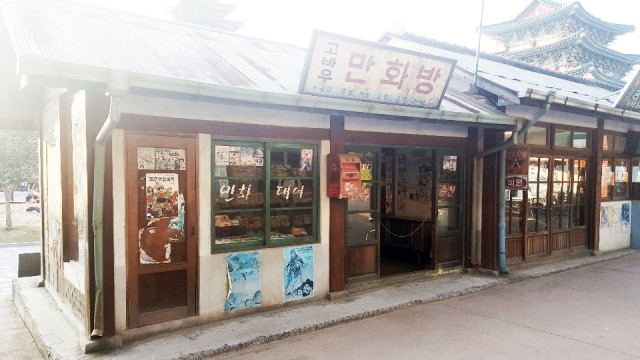 ▲ the exterior of an early rental library 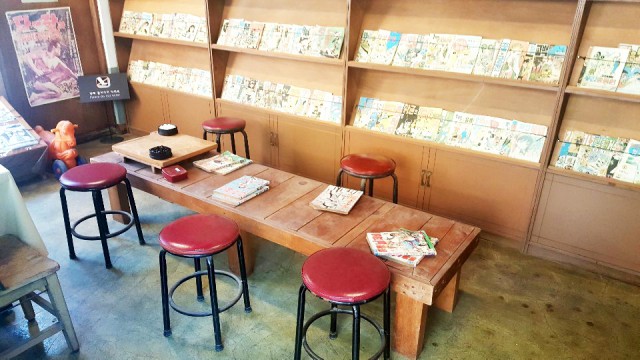 ▲ the inside of an early rental library

In the webtoon industry, some believe that if the portal websites had launched the webtoon service as a paid service from the beginning, they would have been able to eliminate people's distorted perception that the webtoons should be free.

However, in the context of the 2000s when entertainment services such as the internet, movie theaters, videos, and games were available unlike in the 1950s, I assume that it would have been difficult to launch the webtoons with paid services.

Moreover, the 2000s were the time when people's accessibility to the illegal websites was easy enough to a degree where some could even say 'why bother going to comics lending shops when there are illegal scanned versions of comic books everywhere?'.(Now I see that The Night Rabbit and MaruMaru are arrested, I could genuinely feel that people's awareness of copyrights has considerably improved)

In that context, the free webtoon service of the portal websites certainly has played a role in creating an environment where many people could enjoy the comics and webtoon culture again. After all these challenging processes, we are living in a time where movies are produced based on the webtoons and celebrated webtoon artists are nothing new anymore.

Besides that the portal webtoon service has played a significant role in forming the webtoon market in the first place, how could the webtoon industry transfer the webtoon service which people believe should be free into a paid service that could receive fair prices? I had once again looked back into the days of published comic books. Though the comics lending shops have indeed contributed to the foundation of the cartoon market, they also had their limitations. This was because the total sales of comic books were dependent on the number of comics lending shops, not the population of comic book buyers.=Fundamentally, there was a limit to the number of copies that could be sold to each comics lending shop even if there were plenty of them in the country. So, for the publishers that produced cartoons, it was more profitable for them to print five works of a low quality than to craft one high-quality work. As a result, the quality of works has been declined naturally. For example, early-stage comics were not full-length comics but were comprised of three short volumes and the drawing styles were simple enough, even for the freshmen to draw along. Only in such manner, publishers could rapidly produce comics books and sell them quickly to make profits. In the worst cases, one entire comic book was created in a single day (...).While people's expectations were getting higher, the works that could meet or surpass such standards could not be created. (On top of this, the society's negative perception toward lending shops and comic books was also reinforced.)

In such period, the presses like Kid's Hankook Daily and Korea Joongang Daily and other publishers who wanted to resolve the problem of the cartoon market relying too heavily on the lending shops have tried new experiments to provide readers with better works. During this process, the themes that were not covered in previous comic books were addressed, high-quality bookbinding methods and paper materials were used, investments were made to the artists to secure good works and finally, the first Korean comic magazine 'The Treasure Island' was born. As the birth of 'The Treasure Island' influenced the children to purchase comic magazines instead of going to the lending shops, also affecting other children's magazines, it has resulted in a dramatic increase in contents that were related to comics. 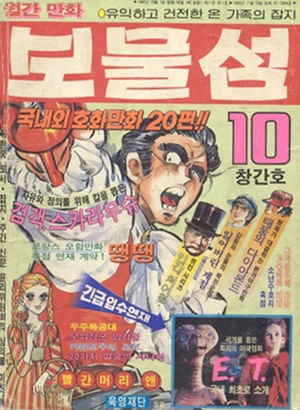 However, as I have looked back in the past, I realized that people were less uncomfortable with paid services when paid services were able to solve problems that free services could not. Therefore, it is crucial to consider the limitations of free webtoon services and which one of them could be relieved by a paid service.

It is a crisis when the generic copies of popular works spread over the webtoon platforms.

When a particular product becomes popular in any industry, similar products soon follow. And in the process, enhancements are made when products differentiate themselves from previous ones. But the real problem occurs when the quality is not improving and the situation never progresses. During the period of comics lending shops, it was suggested that the quality of the works could not be improved due to such reasons and the tyranny of the joint publishing companies. Thereby, the same uninteresting works have filled up the lending shops. This led to the decline in the quality of works across the industry, resulting in many readers leaving the comics lending shops entirely.

Fortunately, such situation has brought a momentum for the comic magazines to grow in size by pursuing high-quality works and bookbinding methods. The interesting fact is that the success of these comic magazines has driven the collapse of joint publishing companies, which had a monopoly on the distribution system of comic books. Taking this incident as an opportunity, the production power was transferred from the publishers to the artists, improving the quality of final works. Artists were no longer as required to draw low-quality cartoons of three short volumes. This gave the artists the freedom to try new experiments to make great works. The renowned works that came out of this process were 'Im Kkeokjeong' by the artist Ko Woo-Yeong, and 'A Dauntless Team' by the artist Lee Hyun-Se. These works were the first full-length comic books that were introduced to the cartoon market where low-quality works of short volumes were widely spread, which had a long narrative which depicted the ideals and conflicts of the protagonists. These comic books had realistic drawing styles that have escaped from the simplistic drawing styles of other previous comic books so that even the adults could get immersed in them. (And from the work ‘A Dauntless Team’, the Korean version was ‘shut up and take my money!’ meme was also born). As a result, the comics lending shops were able to be supplied with better quality comic books than before, and because of this, they could enjoy their second renaissance. Moreover, as the growth of comic magazines also has contributed, this period is remembered as the golden age in the Korean cartoon market which might not happen again. 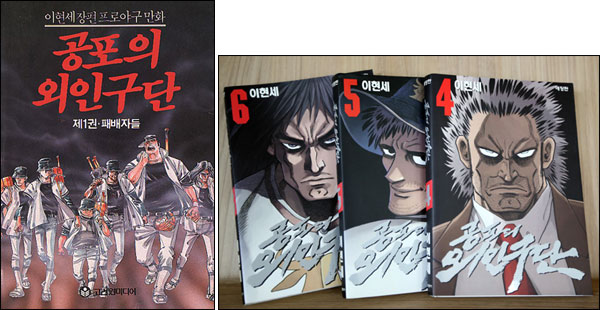 Such cases remind us that when a particular work succeeds, similar works would be poured in into the webtoon platform. Especially, webtoon users tend to look for works that have similar drawing styles and stories to their favorite webtoons. For these reasons, it might be quite appealing for webtoon platforms to offer works that resemble other successful webtoons because it clearly is a way to earn stable sales income. However, they should recognize that though such webtoons could temporarily be helpful in terms of sales, they could cause a decline in the quality of works in the long term. As soon as people's perception that webtoons all look the same gets spread, the users would leave the webtoon market. Moreover, capturing back the users who have already left the webtoon market in the present age where there are plenty of other cultural services, such as videos and games would require a great effort.

Comics and webtoons are contents that give people a chance to look back at their own life by showing the truth about their hidden desires that they could not see otherwise. Furthermore, they do this in a very affordable and highly usable way. Therefore, I believe constantly thinking about how the webtoon industry should create and deliver works that would help people's lives without being biased toward the sales could contribute to the growth of webtoon services substantially.

Thus far, I have shared my ideas that I have gained by looking back at the rise of published comics. In the next article, I would examine the fall of published comics to obtain hints about the future direction of webtoons. Thank you for reading.

NEXT : Finding the Future of Webtoons in the Comics of the Past - The Fall