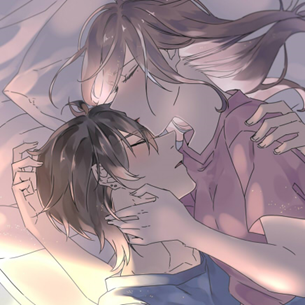 SUMMARY:
After hearing the devastating news about her condition, Ayane Konno, 29 y/o who is at the height of her writing career, knew she was fighting a losing battle for her life. Instead of being struck by sadness, she accepted her fate and decided to live out the remainder of her life doing the things that she loves and experiences that she wishes to make memories of. She then met someone who would accompany her on her journey and paint the short story of her life with pastel-colored pages.
STATUS: Ongoing
AUTHOR: Kuyashii Kiyu 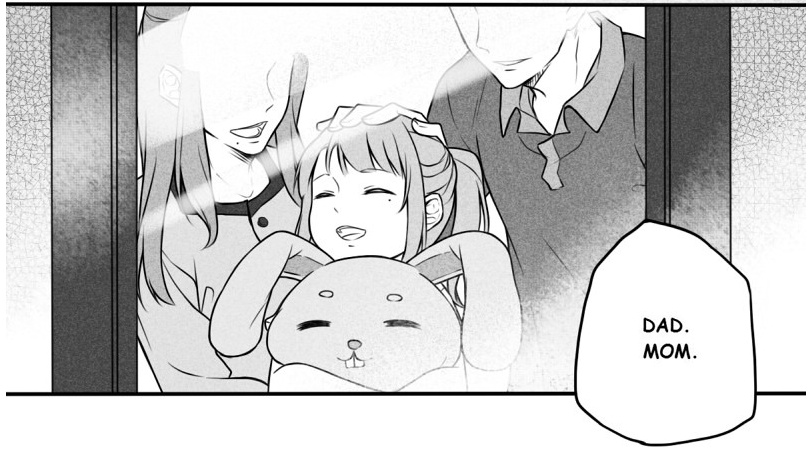 It can’t always be happy. I know the feeling of wanting to read webtoons that always end on a happy note but…it can’t always be like that. But let’s not speak as if it will end tragically. I am among those readers still hoping for the expected ending to change.
The prologue of the webtoon for me was a kind of warning. Although not directly said, the author of Pastel-Colored Pages warned us in the beginning and told us to brace ourselves for what’s to come. The readers were given a choice to either continue or not because there’s a high possibility that it won’t end well. But still…many decided to continue reading on. 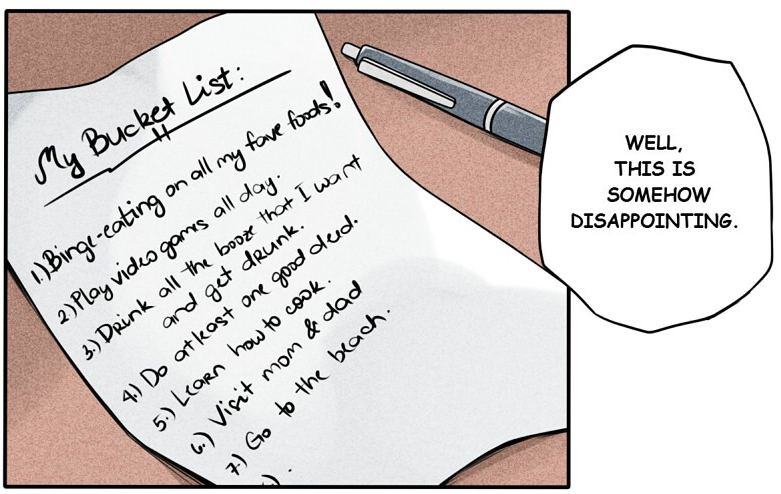 Pastel-colored pages is a story of Ayane Konno, a novelist, who has given up on life after she learned that she has cancer. Upon receiving this information, all she could do was smile and even thanked the doctor in charge. A smile? Yes, a smile. A smile of someone who knows that she can’t do anything about it anymore. All she could think of doing was quit her job, write a bucket list, and fulfill whatever’s written until her day comes. But her plan was ruined because of two things – Masato Hayashida…and love. 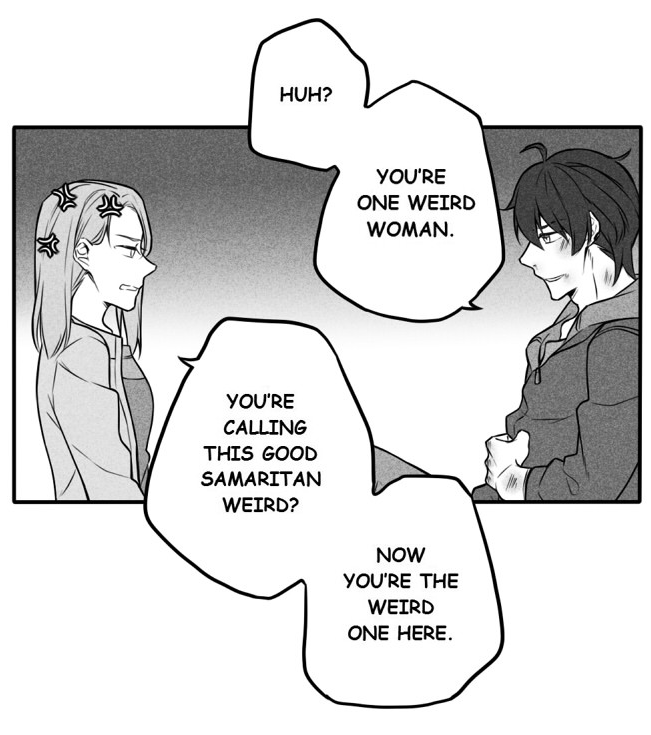 Masato was given shelter by Ayane after being found sitting on the street wounded after having a fight in a bar. Don’t get her wrong, she’s not one to just let anyone enter her house and feed them but she just thought that it doesn’t matter since she already has a deadline. Masato ran away from home in order for him to be happy with what he wants to pursue. While living in the house of Ayane and spending time with each other, unexpected feelings began to surface. They felt at home with each other. At the peak of their realization of their feelings and as they fall deeper into each other’s life, Ayane pushed Masato away, thinking it’s what’s best for both of them. It’s not what she wants but it’s something she has to do, or so she thought. To not hurt and not be hurt. But of course, as most male lead in a romance webtoon would act, Masato won’t let her do that. But he doesn’t know about her condition. 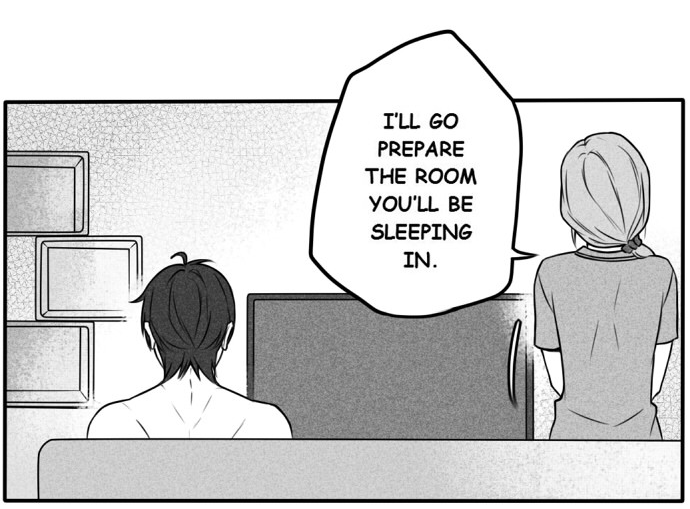 After Ayane had pushed Masato away, he pursued his love for photography while Ayane on the other hand, decided to get treatment and stayed in the hospital. The reason is to have a little more time to see him even if they won’t be together. At this part of the story, Masato still doesn’t know of her situation. Masato, who just came back, was standing in front of Ayane’s apartment door but no one seems to be home. 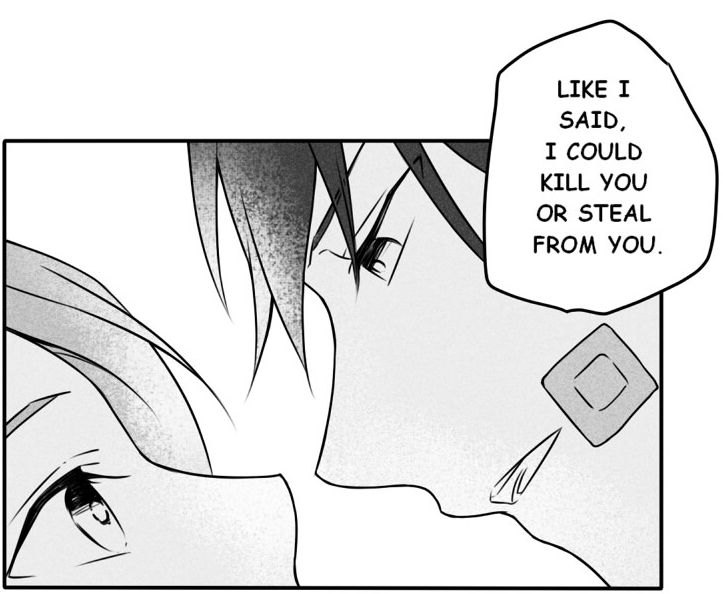 I didn’t like that the situation of Ayane was made known to him by the neighbour. Imagine the state of panic when he heard that she hasn’t been home for days and he doesn’t even know where she is. When he learned where she was, he ran to get there. And starting from there, everything began to unravel and everything was revealed.
“I didn’t mean to fall in love with you. I don’t want to leave you. But…I don’t want to hurt you.”
Honestly, the moment I saw the webtoon on my recommendations, it caught my attention already. The cover image was beautiful that it makes you want to click on it. But I thought to myself, there are so many webtoons with great cover images out there but disappoints you when you read them but this one doesn’t disappoint. If you think your emotions have gone dull, then read this. It will awaken them. It’s scary though, having to read chapter after chapter not knowing what the content of the next one will be. If they will ever be together or if Ayane will still be there. 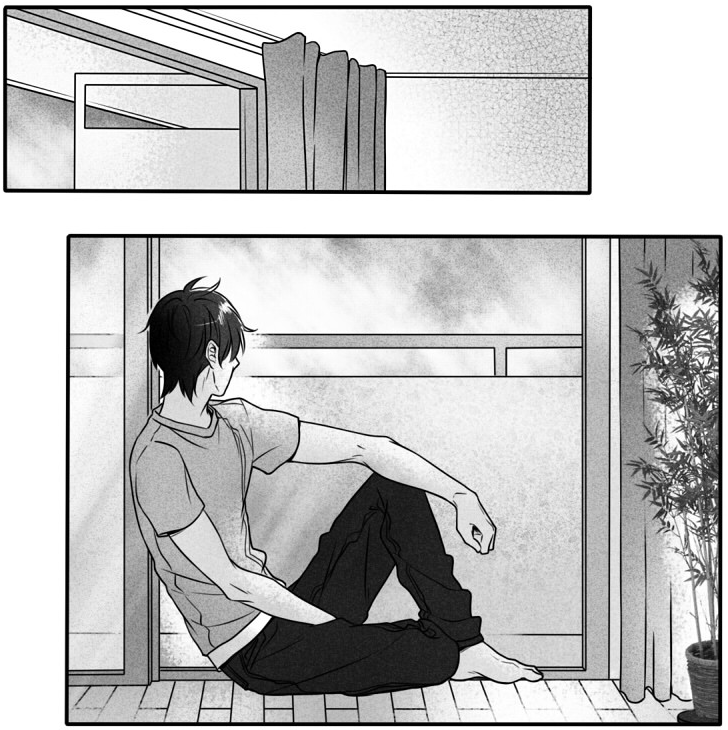 There is something I particularly love about this webtoon. Most of the illustrations are uncoloured but when certain emotions are felt and discussed in the story, that’s the time when colors would make an appearance. Although not exactly explained by the author of how the colors in her webtoon work, it is how it seems to be. This webtoon, I’m assuming, still has a long way to go as it is still ongoing but I will make sure to stay tuned for updates. I’m looking forward for the next one and I hope it won’t hurt as bad as the already released ones.
Let me end with these words from Masato to Ayane, “Please don’t regret having fallen in love. I’m here. I’m not letting you go. Never. I will not leave you again. No matter how much you push me away. No matter how much it’ll hurt me. Please let me bear the pain with you. I love you.”
#webtoon
#PASTEL-COLORED_PAGES